We are now coming towards the end of the International Break and our thoughts are naturally turning towards Saturday’s match when the Bees return to the fray, hopefully refreshed and reinvigorated after a fortnight’s rest and recuperation.

Brentford will be playing away to a Wigan Athletic team which is stuttering, not firing on full cylinders and appears to be still suffering from a hangover after the disappointment of falling at the final hurdle in last season’s Playoffs.

Wigan are currently down amongst the dead men in twenty-first position, a mere three points away from the dreaded relegation zone, a position which comes as a total surprise given that they were fully expected to challenge for honours again this season, and have a large and expensive playing squad oozing with Premier League and International experience.

The natives are getting pretty restless and there are already murmurings, which are rapidly growing in intensity, about the future of their manager, Uwe Rosler, who has presided over a run of only six victories in his last twenty-six matches despite spending expansively on recent signings such as Oriol Riera, Adam Forshaw and Andy Delort.

And yet it all started so well for Rosler last December after he took over from the busted flush in Owen Coyle.

Rosler provided the impetus and leadership that saw Wigan not only reach the Playoffs but also come within a hairsbreadth of beating Arsenal in the FA Cup Semi-Final.

He rightly received broad recognition for his achievements which were truly excellent but, in my view, should have been even better.

I watched him put out a team  that contained only one striker in their home Playoff match against Queens Park Rangers, and it certainly appeared that the summit of his ambition was the nil-nil draw he ended up with.

Wigan came out of the traps quickly in the Second Leg at Loftus Road, went a goal up but then sat back, totally gave the initiative to the home team, attempted to soak up their pressure and rely on breakaways, and eventually lost the game and the tie.

More Playoff heartbreak for Rosler to follow on from the previous season’s excruciating defeat for Brentford in the Wembley Final against Yeovil.

Now Rosler is no longer the fans’ favourite at the DW Stadium.

Their complaints center upon his perceived lack of consistency in team selection, regular changes in formation, his innate caution, negativity and over-analysis, and  his overriding reluctance to take the handbrake off.

Now where have we heard some of those accusations before?

We would be lying if we just said that this was merely another match for Brentford, as there is obviously added spice to the proceedings on Saturday given the presence in the Wigan ranks of Uwe Rosler as well as Adam Forshaw and our former Head of Performance, Chris Haslam.

All three of them formed the Brain Drain from Griffin Park as they left Brentford to supposedly better themselves in their new home in the North West of England.

Whilst it is easy to be objective  and open minded, and acknowledge that Rosler and Forshaw were joining a club that were FA Cup winners and in the Premier League less than two years ago, and that they were both returning to their stamping grounds nearby, that does not make their loss any more palatable to Brentford supporters.

It will certainly be a fascinating tussle on Saturday, if not a grudge match, as Rosler and his former Sporting Director, Mark Warburton, go head to head.

They know each other’s strengths and weaknesses inside out.

Will one of them surprise and perhaps out smart the other or might they even cancel each other out?

I see no reason for Brentford to change anything in either their approach or style of play.

Warburton gives due attention to his opponents and how they are likely to set up against him but is far more concerned about what damage his Brentford team can inflict upon the opposition, rather than vice versa.

Surely a healthier and more positive approach than Rosler’s cat and mouse efforts to out think and perhaps over analyse the other team?

Warburton’s Brentford are proactive and dynamic and are always looking to seize the initiative, Rosler’s Brentford were reactive, constrained and cautious.

Perhaps I am over generalising but I think I have assessed the two mens’ style pretty accurately.

That is not to rewrite history or diminish Rosler’s achievements at Brentford.

His overall record was truly exceptional. 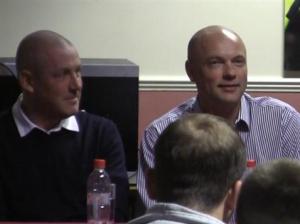 He oversaw one hundred and thirty-six competitive games in all during his two and a half seasons at the club, was unbeaten in seventy-three per cent of them and had a forty-three per cent win ratio.

Impressive figures indeed, but the feeling persists that it could and perhaps should, have been even better.

So many away games saw a similar pattern emerge.

Brentford would dominate possession, play pretty and intricate football with very little or no end product and then attempt to hold on to what they had for the last quarter of the game.

So many memories remain, so many opportunities missed:

We played Doncaster Rovers, the eventual Champions, off the park one October Saturday, but failed to put them away and lost ridiculously to two late goals having dominated the entire proceedings.

A defeat that ultimately had a massive effect on the final league table.

The same thing happened at Orient on a match shown live on Sky Television.

Total domination in possession, no penetration and a loss to a spawny, late and offside goal.

Playing three centre halves on the opening day of the season at Bury and allowing a poor team to escape with a draw.

A late concession to Scunthorpe after running the entire game and missing yet another penalty.

And please do not get me started on penalty kicks and the opportunities we threw away from them over his entire period at the club.

Rosler was an out of left field appointment by Matthew Benham, which nobody saw coming, and he certainly laid impressive foundations at the club and instigated a revolution in terms of the off field support team who were second to none at our level of the game.

He improved our football, and with the help of Warburton and an enhanced playing budget, brought in far better players and almost took us to the Playoffs in his first season, until we blew it on a ridiculous afternoon of low comedy and frustration at Stevenage.

But never mind, everything was in place for a promotion charge the following season.

As you all know, despite all of us doing our best to forget, it finally ended in tears.

Last season saw a poor start culminating in the defeat at Stevenage and the now famous behind closed doors meeting in which a lot of home truths were apparently expressed on a variety of concerns, including Uwe’s insistence on rotating his players and his overall management and tactical approach.

With the air cleared and a far more consistent selection policy employed, the Bees went on a long unbeaten run that continued until the point when Rosler was approached by Wigan and decided to jump ship.

His relationship with the Brentford fans had deteriorated after a couple of intemperate outbursts after victories against Colchester and Bristol City, and the feeling persisted that perhaps the time had come for a parting of the ways.

A point of view heightened by the success achieved by Mark Warburton once he succeeded Rosler and managed to put his own stamp on the team, and changed their approach towards the game.

Rosler too seemed to be revitalised and reinvigorated by his new challenge at Wigan, which brings us back to where we started.

I wish Uwe well and thank him for taking Matthew Benham’s vision for the club on board and coming so close to finishing the task of getting Brentford into the Championship.

Uwe’s alleged actions since he joined his new club and appeared to want to spirit away a succession of players and back room staff from Brentford, whilst a real compliment to our quality, have further hardened attitudes towards him.

I hope he learns from his roller coaster experiences over the past couple of years and that he makes an ultimate success of his managerial  career.

Ideally he will adapt his approach, become more positive and less analytical and far less fearful of the opposition.

If he manages to do so then he will throw off the “Nearly Man” tag that is beginning to follow him around.

As for Saturday, let’s just play the team and not the man and in that case there is every chance that the Bees will not return home empty handed.